Office rental in the Old Tbilisi

More and more non-residents are interested in office rental in Tbilisi. This is due to the fact that Georgian economy in recent years had demonstrated a positive dynamics. For example, a forecast of the European Bank for Reconstruction and Development for 2019 – GDP increase for 4,5%, forecasts of IRF and the Asian Bank for Development are even more optimistic – increase for 4,8% and 5%, respectively. Besides, non-residents love this country for the possibility to make lucrative investments. Reforms taken by authorities of Georgia promote the extra trust to the country among international organizations, while different means for optimization of taxation let foreign businessmen to operate more effectively after registering a company in Georgia.

Tbilisi is an ancient city; it is considered that it was established in the V century A.D. Nevertheless, archeological digs prove that in the territory of Tbilisi as early as the I-II century A.D. thermal baths were established. In some regions of the capital there were found settlements dated by the VI-III centuries B.C.

The centuries-old history of the city left an imprint on its architecture. In Tbilisi, there are many sights that attract tourist from around the world. Meanwhile, historical monuments are not the only thing that attracts foreigners to the capital of Georgia; Tbilisi is also the business center of the country. Here state authorities, embassies and consulates of other countries, headquarters of Georgian banks, representative offices of international organizations and corporations located. This all is the reason why Tbilisi is the most visited city in the country; at that, the number of foreign visits to the capital is not seasonal by nature. It should be noted that many travelers give preference to living in Tbilisi due to a developed urban infrastructure. The city has a metro, an international airport, a railroad station; public transport is available, there are many shops, cafes, trade and entertainment centers, kindergartens, schools, and higher education establishments.

Benefits from office rental in Tbilisi

Which benefits do businessmen get from office rental in Tbilisi? It is reasonable to establish one’s business in the capital of Georgia due to the following:

Learn more about all benefits of registration of a company in FIZ Tbilisi.

Learn more about how to register company in Georgia.

As it was mentioned before, Tbilisi is not only the capital but also is the most advanced city of the country. Having one’s office in the capital of a European state is quite prestigious.

Office rental in Tbilisi is most interesting for businessmen who plan to start their operation here, and also for those who had already registered a company in Georgia. An available comfortable office in the center of the capital is high-prestige as well as practical – central parts of the city have a developed infrastructure, many public transport options, and high attendance.

Office rental for a company in the Old Tbilisi

Advantageous placement of a company office plays an important role in successful business. We offer you to consider office rental in the Old Tbilisi in the street Besiki. This is the district Mtatsminda, the top central one in Tbilisi, located between the namesake mountain and the river Kura; on the South it borders the district Sololaki, and on the North  – the district Vera.

In Mtatsminda there are many residential premises, administrative offices and high-end hotels (Marriott and Radisson-Blue), and cafes. There are also many historical and architectural sights (temple Kashveti, the old building of the Georgian parliament), the Rustaveli Theater and the Griboedov Theater.

The office premise for lease is located on the 1 floor of the 2-story building. it comprises 5 rooms: kitchen equipped with all the necessary household devices, utilities and furniture, toilet facilities and three spacious premises where the office personnel and administration can be arranged with all conveniences.

The total area of the office premises is 110 sq.m. An up-dated finishing and all necessary utilities (hot water, central heating, cable TV, and Internet) are available. 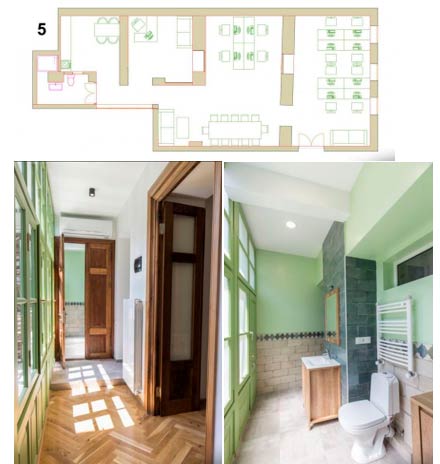 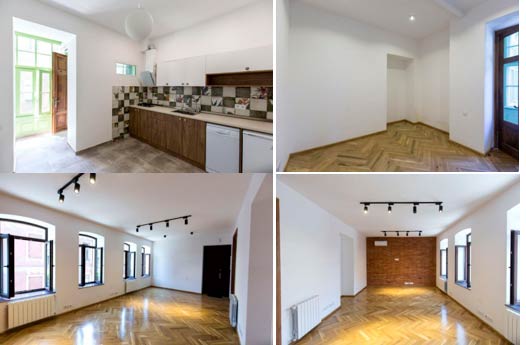 The price for office rental in the Old Tbilisi – 1 540 USD per month.

If you are interested in renting a spacious office with a modern finishing in a prestigious district of Tbilisi, please contact us at: info@offshore-pro.info. We will help you to conclude an agreement for the required period, and will also explain the peculiarities of making business in Georgia.