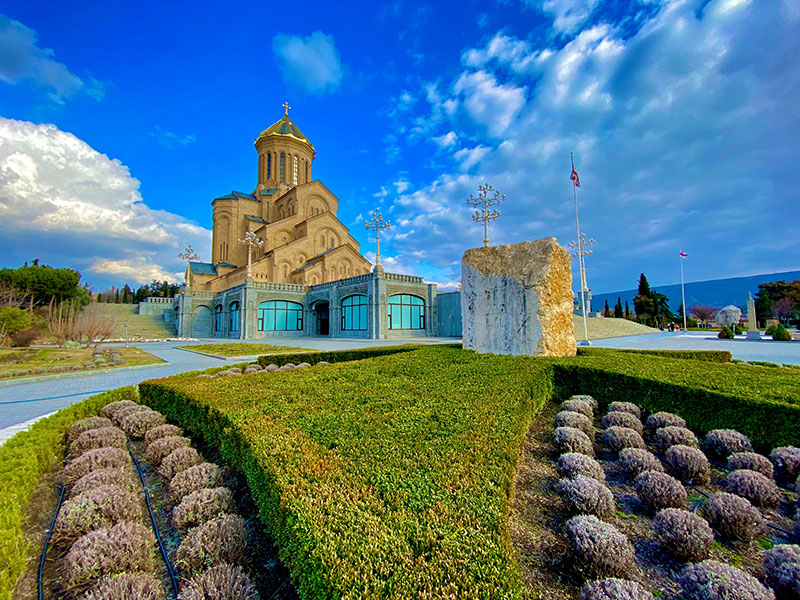 Georgia increasingly gains and holds leading rankings in the world in terms of business environment and as a regional tourist center, moreover, it also attracts many foreigners who want to move here for a long period of time, if not forever. Compared to many European and Asian countries, living expenses are lower here, but at the same time the country offers high-quality food, clean ecology and beautiful nature.

Foreigners who visit the country for tours or for a long period of stay, are recommended to start acquaintance with Georgia from churches, as these spectacular buildings will tell you about the ancient history of the country more than anything else.

Find out  more about  various types of a Georgian residence permit

Exploring the monasteries of Shida Kartli in Georgia

Shida Kartli is a region in the central part of Georgia with a population of about 260 thousand people. It borders on in the west – with Imereti, in the north-west – with Racha-Lechkhumi and Kvemo-Svaneti, in the east – with Mtskheta-Mtianeti, in the south – with Tbilisi, Kvemo Kartli and Samtskhe-Javaneti. The administrative center of the region is the city of Gori.  ​​Shida Kartli is the 8th by area, and 7th by the number of population among other regions of Georgia.

The climate in the region is continental, with an average annual temperature of 11 ° C. However, in summer the temperature can rise up to 42 ° C. There are only four cities in Shido Kartli: Gori, Kaspi, Kareli and Khashuri and more than 300 villages.

The region has a rich history and a large number of scenic temples which we will be happy to present to you. So, here are the best religious monuments of the region according to John Graham Tours tourist portal.

Kvatakhevi or Kwabakhevi is a Georgian monastery of the 12th-13th centuries, built in honor of the Assumption of the Mother of God. It is located in the municipality of Kaspi, at distance of 5 km from the village of Tsinarehi. Kwabahevi is a temple which embodied the canonical forms of the Georgian domed church to the fullest extent.

The monastery was badly damaged in the XIV century during the invasion of Tamerlane. In 1854, it was restored by the grandson of George XII, Prince Ivan Tarkhanov.

This is a large cathedral of the beginning of the XIII century. It is located in the village of Ertatsminda in the municipality of Kaspi. The cathedral is remarkable for its rich carvings. It is one of the last buildings of the “golden age” of Georgian architecture. It should be noted that the Ertatsminda Cathedral has survived to our days with virtually no damage. It also served as a family tomb of the Saakadze princes.

The Temple of Mother of God is located in the village of Chachubeti, in the municipality of Kaspi. Built in the VIII-IX centuries, the temple dates back further than the two previous ones. There was a time when its walls were covered with rich paintings, subtle fragments of which have survived to our days.

The Temple of Princes Magaladze or Magalaant Ecclesia (XII century) is 2.5 km from Tsinarekhi village in Kaspi. Starting from the 15th century, it belonged to the strong princely family of Magaladze. The locals call him Magalaantkari. The latest reconstruction of the complex was carried out between 1937-1941.

The complex of princes Magaladze consists of four main parts: the hall church with beautiful painting. The very first painting dates back to the construction of the temple, and the last layer of painting was applied in 1677 by order of Nikoloz Magaladze, who also restored the entire complex. The facade of the church is particularly impressive. The beauty of ornaments and carvings can be compared with the best examples of Georgian medieval architecture.

St. George’s Monastery – an architectural monument of the first half of the 11th century, is located in the gorge of the Shabtskalas River in the extinct village of Ikvi. The religious building is remarkable for its complex decorative stone carvings and frescoes of the 12th-13th centuries. The last time the capital restoration of the monastery was carried out in 1939-1940.

Currently inactive monastery complex was built in the 7th-17th centuries. It is located 20 km. southeast of the Caspi in the upper part of the Tedzma valley. Rkoni is considered one of the oldest religious buildings in Georgia. Its construction began in the 7th century, then it was rebuilt numerously. The following complexes have survived to our days: the Mother of God’s Church (VII century); the gate, chapel, one-nave church of John the Baptist, the refectory and the tower of Svimon Mesvet (XII-XIV centuries), and at later periods a bell tower, housing for a monk and outbuildings were built in the temple complex (XVI-XVIII centuries).

Also, the famous stone bridge of Queen Tamar is in close proximity to Rkoni, which has survived since the 12th  century.

In addition to the above monasteries, there are no less interesting architectural monuments in Shida Kartli that you should definitely visit:

Georgia is not incidentally a tourist center of the region. On the territory of the country there is an exceptionally large number of historical attractions that are highly valuable both by their architecture and history.

If you are interested in moving or relocating to Georgia, or obtaining a residence permit or permanent residence, as well as doing business in this beautiful country, write to us at info@offshore-pro.info and we will contact you as soon as possible.