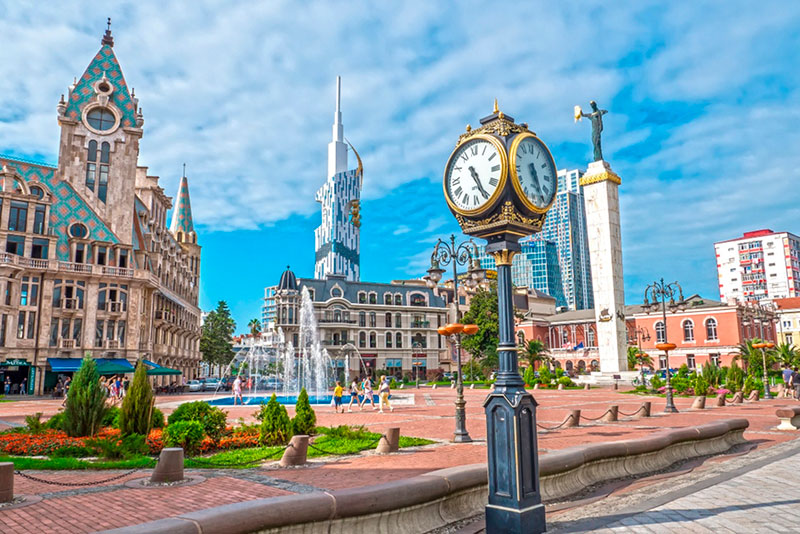 Batumi is indisputably the most famous resort city in Georgia. In 2019, Batumi was awarded the so-called tourism “Oscar” in the nomination “The best fast-growing tourist destination in Europe”, and in 2020 Forbes included Batumi in the list of TOP-6 cities where it is best to invest in real estate. The capital of Adjara is actively developing and is already recognized as one of the most successful cities on the Black Sea coast. Every amenities are available here for living for a long period or perhaps for a short getaway, or a family leisure for several days or weeks: a variety of attractions, wonderful cafes and cozy restaurants, new buildings and hotels with developed infrastructure, a beautiful promenade, sea and mountains, as well as casinos, disco clubs, marinas for yachts – all available to accommodate various tastes.

Attention!!! For investment in real estate at sea in Georgia, particularly – in Batumi, in Kobuleti or other cities, do not hesitate to contact us by mail: info@offshore-pro.info or online chat. We will revert to you as soon as possible.

Batumi in June: the most remarkable benefits that make Batumi a great place to visit

Advantages of visiting Batumi in June:

· not overcrowded by tourists;

· not as hot as in July-August;

In June, a large number of international festivals take place in Batumi. Among them are: dance and vocal Art Folk Fest , and the festival of classical music, and the festival of young wine, as well as various art exhibitions. Moreover, often celebrities visit the city as part of their concert tours. In early summer, Batumi is still relatively free of extensive tourist influx, which is characteristic of the other summer months – therefore it is relatively easier to find good housing accommodation by the sea, plus enjoy affordable prices for food and fruit in the markets.

However, when planning a trip to Batumi in June, you must keep in mind to be prepared for rainy and cloudy weather. But this does not mean that it will be boring: you still can plan your recreation through many  tours, as there are huge number of attractions, both in the city and in the neighbourhood, to name a few: Batumi Nature Reserve, Petra Fortress, Gonio Fortress, Ali and Nino sculpture, dolphinarium, water park, dancing fountains, Machakhela National Park, Makhunseti waterfall. Moreover, you may also wish visit other regions of Georgia: Ureki (55 km), Kutaisi (157 km), Borjomi (212 km), Tbilisi (375 km).

Learn about the main reasons to buy property in the most popular resort city of Georgia .

The sea in the first summer month warms up to a temperature of 23-24°C. Therefore, in the first half of June it’s still not quite comfortable to swim, but around the third decade of the month the water will be warm enough to allow for comfortable swimming.

It should be taken into account that humidity is rather high in Batumi, with up to 158 mm of precipitations in June, but the rainiest period is from October to January. The number of rainy days in June can be either 2-3 or more, so it is better to study the weather forecast before the trip. It is usually cool at night, which is why there are many mosquitoes and midges here.

The beach in Batumi is not sandy but it is covered with large pebbles. It should be noted that in June the number of tourists is still low, and therefore, the sea is quite clean. However, those who prefer a quieter relaxing holiday as an option, may prefer the beach in the vicinity of Batumi, which are also famous for exceptionally clean beaches: Sarpi, Kvariati, Gonio, Kobuleti. And the beach near the Botanical Garden in the Cape Verde district is very popular among tourists. There are cafes open in summer, with a lot of attractions nearby. The most popular resort among Georgian politicians is Chakvi (17 km from Batumi). It has a very beautiful nature, clear sea and a wonderful beach.

Sandy beaches can be found in Shekvetili (44 km), Ureki (54 km), Magnetiti (56 km), Grigoleti (60 km). The sand in Ureki and Magnetiti is black, since it is of volcanic origin. Due to its magnetic properties, it is known to have healing effects for joints, nervous system, metabolism.

According to Tripadvisor portal, Batumi Boulevard leads the list of the best attractions of the city. All of  the best restaurants and cafes, beautiful illuminations, palm trees, parks, interesting sculptures are concentrated here. The length of Batumi Boulevard is about 10 km. Many travelers recommend evening bike trips along the boulevard.

Europe square is the second on the list of ranking ​​. This is a very beautiful square with a fountain and a statue of Medea. Europe Square is surrounded on all sides by interesting buildings, which only adds to its color and attractiveness.

In third position on the list is the driving sculpture of Ali and Nino. The heroes of the sculptural composition, the Azerbaijani-Muslim Ali and the Georgian-Christian Nino, slowly move towards each other to merge in a kiss and disperse in different directions. This sculpture is the hallmark of the city, but in order to fully understand its meaning it is recommended to familiarize yourself with the history of Ali and Nino.

The fourth place in the ranking is the astronomical clock. They are in the central part of Batumi on Europe Square. The clock is remarkably similar to the clock in Prague, it also shows the signs of the zodiac, the location of the sun, moon, planets, eclipses, etc.

According to Tripadvisor, the TOP-5 attractions of Batumi are closed in on Piazza. It is a replica of the San Marco square in Venice, with many cafes, bars and restaurants. Floor mosaics in the center of Piazza are recognized as the largest marble figure mosaics in Europe.

For gourmets, Batumi offers a large number of different restaurants and cafes, where many dishes of both European and Georgian cuisine, delicious wine and chacha will be offered to guests. The city is extremely attractive and has significant tourist potential. Many hotels of such international brands as: Sheraton, Hilton , Radisson Blu , Wyndham , Le Meridien can be found in the city. In addition, casinos and gambling are not banned in Batumi, and the government of Adjara plans to make a world center of gambling here.

If you are interested in buying highly profitable real estate on the Black Sea coast in Georgia, write to us by e-mail: info@offshore-pro.info and we will get back to you as soon as practicable.

Is it warm in June in Batumi?

In Batumi, in June the temperature during the day is 25-30°C, and at night it goes down to 15-20°C. But it gets hotter at the end of the month: during the day the temperature will be above 30°C and at night – from 20°C. The sea in June warms up to a temperature of 23-24°C. Therefore, in the first half of June it may still not quite comfortable to swim, but around the third decade of the month the water will be warm enough for comfortable swimming.

What are the best international hotels in Batumi?

Many hotels of such international brands as: Sheraton, Hilton, Radisson Blu, Wyndham , Le Meridien can be found in Batumi. Also, you will be able to rent residential real estate at prices significantly lower than during the high season (July – September).

What are the top attractions in Batumi?